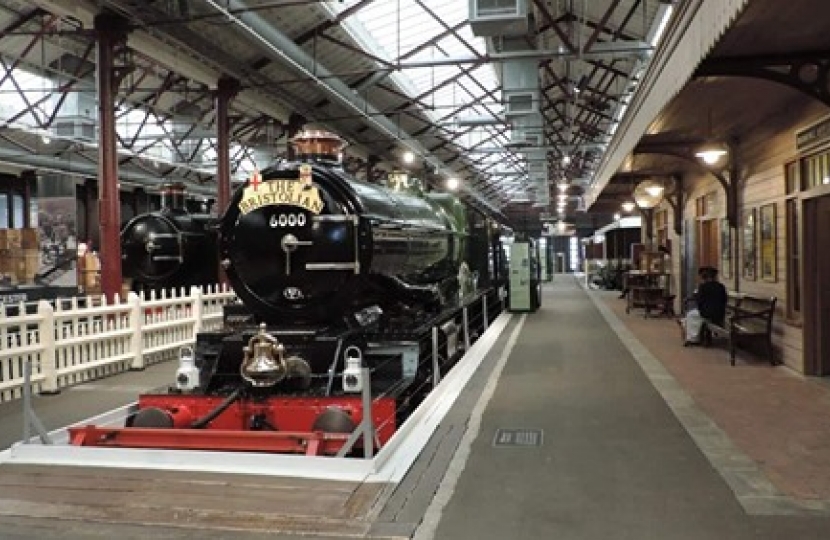 Staff at STEAM are marking this important milestone with a look back at the early days of the museum and some of its many highlights from the last two decades.

The museum is currently closed due to COVID-19. When it re-opens, however, visitors will be able to attend the museum for the same admission prices that greeted the very first visitors to STEAM 20 years ago.

STEAM’s doors opened for the first time on Wednesday, 14 June 2000, and royal approval soon followed when HRH the Prince of Wales officially opened the Museum on 27 June.

A number of volunteers and staff members that work at STEAM today were involved with the preparations for the new museum, including the transfer of the collection from the former Swindon Railway Museum in Faringdon Road, which is now The Platform.

Liz Day, Membership Secretary of the Friends of Swindon Railway Museum, said: “The things I remember are being surrounded by cardboard boxes for months as we were trying to pack everything up ready for the move. When I first went into the new building, long before we opened, I thought I would never be able to find my way around.

“The night before we opened, we were in the building for many hours on our knees cleaning. I did my bit in Caerphilly Hall. I can’t remember what time we went home but not far off midnight.”

Kevin Shurmer, Visitor Experience Assistant at STEAM, said: “I started working for the STEAM Museum at the beginning of 1999. I worked in the Long shop opposite, renovating all sorts of things to go in the new museum. My main project was the Shunters Truck. The shunters truck was in a terrible state when it came in, and was almost deemed impossible to renovate. Over a period of six months, we successfully renovated parts and returned it to its former glory.”

Cllr Dale Heenan, Swindon Borough Council’s Cabinet Member for the Town Centre, Culture and Heritage, said: “Last year more than 130,000 people visited the museum to learn about Swindon's rich heritage, and the staff do a tremendous job in bringing to life science, technology, engineering, art and maths topics for visitors.

“The success of the Science Festival and the Brick Show, which will both return, means I believe STEAM has a bright future ahead for another 20 years. And there is still so much potential. A fun fact is that the original Hogwarts Express, Olton Hall, was built in Swindon 83 years ago, at Swindon Works.”

Redevelopment of the 19-Shop into Great Western Hall

Acquisition of The Harry Collection

In 2011, STEAM received a once-in-a-lifetime bequest. Now known as the Harry Collection, the donation included an enormous number of historically significant items, which are now on display throughout STEAM.

Elaine Arthurs, STEAM Collections and Exhibitions Officer said: “Mr Harry, who died in August 2005, was a serious Great Western collector over many years and clearly had an eye for the best quality material. He started off his early career at Swindon Works before moving to the banking world and his passion was evident as the items arrived in pristine condition.”

Swindon175 – the return of King George V and City of Truro

Two flagship locomotives made a timely return to Swindon in November 2015; No. 6000 King George V and No. 3717 City of Truro. Their arrival signified the beginning of Swindon175 - a yearlong programme of events to commemorate the anniversary of Swindon’s historic railway works.

Both engines remain on display at STEAM. They are on temporary loan from the National Railway Museum.

In 1867, the first steam-powered hooter to call employees to work was installed. Three decades after Swindon Works closed, local steam engineer Colin Hatch of Wanborough built and installed a replica of the famous Swindon Works hooter on the roof of the STEAM building as part of the Swindon175 celebrations.

Today, Colin blasts the iconic sound of Swindon at special events throughout the year.

In August 2018, a momentous occasion in Swindon’s history saw GWR locomotive No. 2818 returned to the site where it was built in 1905. Designed by GWR chief mechanical engineer George Jackson Churchward, the 2800 class of heavy freight locomotives was hugely successful for the Great Western Railway. No. 2818 worked as a heavy goods carrier and was used during the First World War to transport coal for the Royal Navy.

No. 2818 is the first complete locomotive to be owned by STEAM. The engine is displayed on STEAM’s recreated 1930s station platform.

Throughout June and July, STEAM will be sharing more of their incredible achievements and highlights on social media. Visitors are also encouraged to share their photos and memories of STEAM.

To find out more about the Museum, please visit: www.steam-museum.org.uk

2022 Spring Forum to be hosted in Blackpool