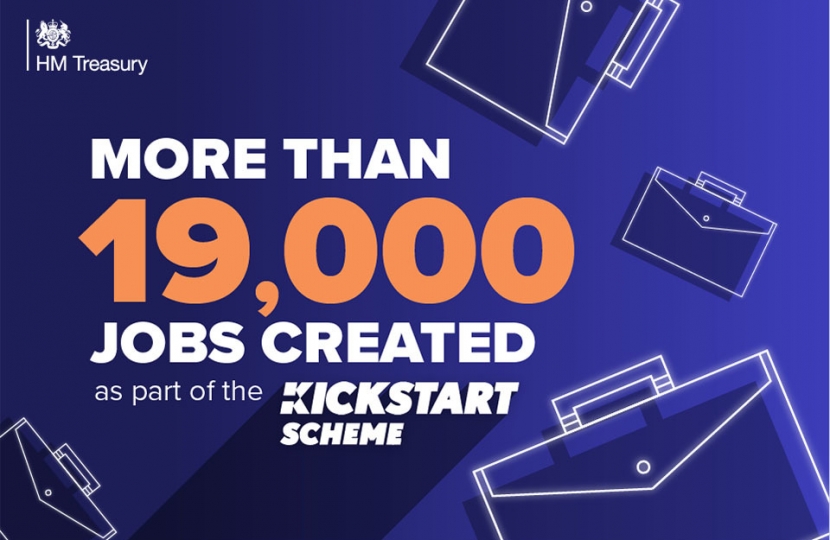 Swindon MPs Robert Buckland and Justin Tomlinson are calling on local employers of all sizes to sign up and take advantage of the new simpler Government Kickstart Scheme.

More than 120,000 jobs for 16 to 24-year olds have now been created across the country through the government’s flagship Kickstart Scheme, as ministers have urged more employers to get involved.

From 3 February 2021, the Government will make it even simpler for employers of all sizes to benefit from joining the scheme by removing the limit requiring they create a minimum of 30 vacancies to apply directly.

Under the scheme, announced in June 2020 as part of the government’s Plan for Jobs, employers that sign up will be able to offer youngsters aged 16 to 24 who are claiming Universal Credit a six-month work placement that is fully funded by the government.

This means the government will pay 100% of the young person’s age-relevant National Minimum Wage, National Insurance and pension contributions for 25 hours a week, which the employer can top up if they choose to.

The government will also pay the employer £1,500 for each young person they take on, to support any training or associated costs like uniforms they might incur when setting up the scheme.

The scheme is helping to put young people who have been some of the hardest hit by the economic impact of the pandemic on the first rung of their career ladder.

"We are pleased that here in Swindon, several local businesses have already taken advantage of the Government Kickstart Scheme, with young people here in the town also benefiting.

“We are glad that the Government has made it even simpler for employers of all sizes to apply by removing the limit requiring they create a minimum of 30 vacancies to apply directly.

“For those employers who want support to get involved with the scheme – they can continue to partner with one of the many gateway organisations such as the Local Authority or Chamber of Commerce. Gateways can help provide a local connection and the necessary wrap-around support which is a hallmark of the Kickstart Scheme.”

Secretary of State for Work and Pensions Thérèse Coffey said:

"Kickstart has moved up a gear and I encourage employers to join us and invest in the next generation of talent by joining our Kickstart scheme.

"By removing the threshold of a minimum of 30 jobs for direct applications, we are making it even simpler to get involved.

"Now is the time to prepare for post-lockdown placements and employers will now have a choice to apply directly or through one of our 600 fantastic Kickstart gateways who may be locally connected or sector-specific providing that tailored support."

"Young people are among the hardest hit in times like these, which is why we’re doing everything we can to ensure they’re not left without hope and opportunity.

"The Kickstart Scheme is central to this. Since opening for applications last Autumn, we’ve worked with some of the most exciting companies to create more than 120,000 Kickstart jobs – which is a huge vote of confidence in our young people at a challenging time.

"With £2 billion available and no limit on the number of places, it’s now easier than ever for businesses across Great Britain to take part. Join us as we harness the talents of the new generation of kickstarters.”

If you are a local employer who would like more support with the scheme in North Swindon, you can also email Justin Tomlinson directly on justin.tomlinson.mp@parliament.uk

If you are a local employer who would like more support in South Swindon, please email Robert Buckland MP on robert.buckland.mp@parliament.uk