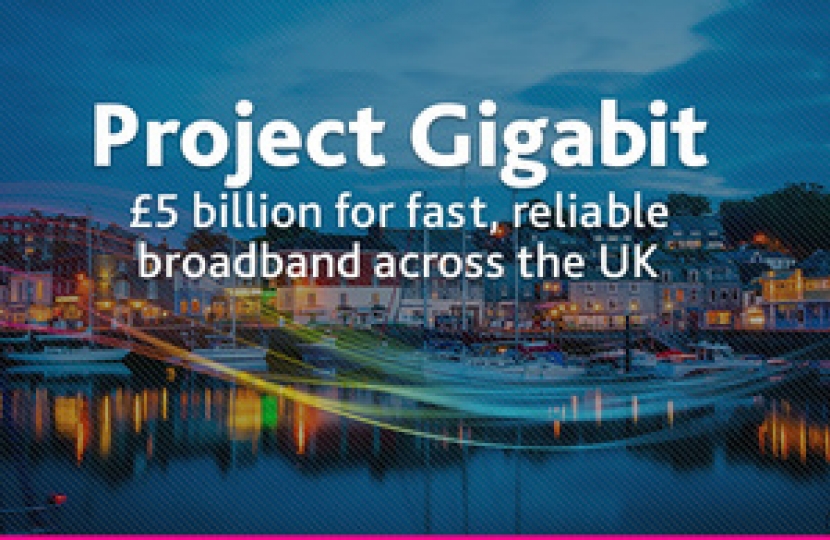 South Swindon MP Robert Buckland has welcomed the news that areas of Swindon, including parts of Wroughton, Bishopstone, Hinton Parva, Foxhill and Russley Park, which are not covered by the fibre rollout from Swindon, are set to benefit from new government funding to help hard to reach areas.

Robert has been working closely with local ward councillors Cllr Gary Sumner, Cllr Cathy Martyn, Cllr Dave Martyn and Cllr Brian Ford to support residents who are not covered by the fibre rollout and has been pushing for further government schemes and funding.

Following this, the government has now named Swindon as one of several areas that are set to benefit from an additional £5 billion of funding as part of Project Gigabit to level up hard to reach premises and deliver next-generation connectivity.

The government’s Project Gigabit fund to upgrade digital infrastructure in hard-to-reach areas will accelerate the country’s recovery from covid, fire up high-growth sectors such as tech and the creative industries, put an end to families battling for bandwidth and bring the speed and reliability people need to start and run businesses.

Up to 1,850,000 additional premises across 26 English counties will get access to gigabit-speed internet of 1,000 megabits per second - enough to download a HD movie in less than 30 seconds and lay the foundations for next-generation tech such as 8K-quality video streaming.

It brings the current total number of premises in scope for government-funded coverage to 2.2 million, with more still to be announced over the coming months across England, Scotland, Wales and Northern Ireland.

This is in addition to the tens of millions of premises that broadband firms are rapidly connecting through their commercial rollout, from one in ten households in 2019 to more than two in five today. The UK is also on track for the fastest rollout in Europe this year and for 60 per cent of all households to have access to gigabit speeds by the end of this year.

“I am pleased that after campaigning on behalf of many local residents, the government has announced an additional £5 billion to level up digital infrastructure in hard-to-reach areas including here in South Swindon.

“A procurement exercise will be completed by August 2022 and schemes built in 2023. More details will come forward in the coming months, but this new scheme should genuinely be life-changing in a new digital age.”

Further information about the Project Gigabit Scheme can be found by visiting Project Gigabit – Building fast reliable broadband for everyone in the UK (campaign.gov.uk)