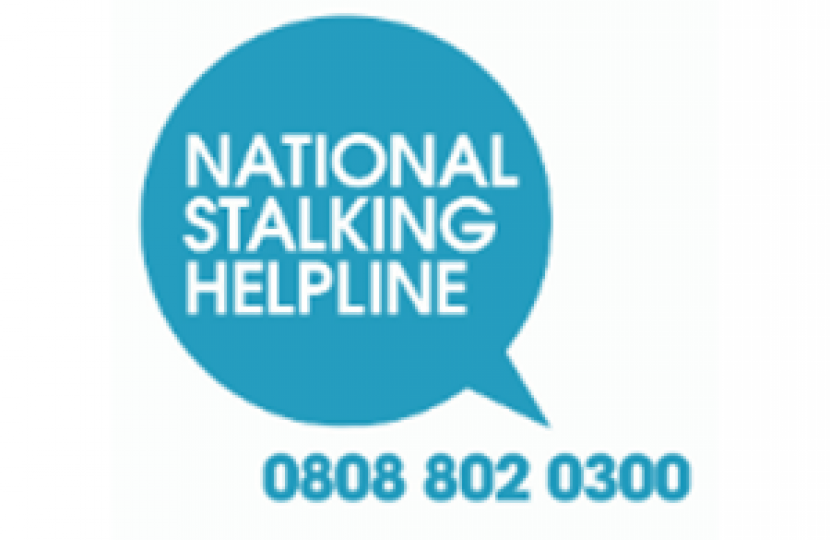 It is National Stalking Awareness Week and this year’s theme is ‘Unmasking Stalking: A Changing Landscape’.

Many of you would be forgiven for thinking that during the Covid lockdown that victims of stalking would have been given some respite, but this has sadly not proven to be the case as we have seen a rise in online stalking, which is just as insidious as its offline equivalent.

We have also seen an increase of calls and complaints being made to helplines and to agencies in general. So, it is the job of everyone here in Swindon and across the country to raise awareness of this wicked crime, to increase support for victims and also to address those perpetrators who are carrying out this appalling conduct.   As a backbencher, I helped lead a cross-party campaign to make stalking a criminal offence, and since then the Government continues to work to strengthen the way in which the authorities deal with this.  There is still much work to be done, but newer and better ways of monitoring perpetrators are coming forward and I am determined to carry on improving the experience for victims, accepting the fact that there is much more to be done.

As ever, local issues are part of my daily work.  I have used the lockdown period not only to keep in contact with residents via technology but to get out and about safely in Swindon, keeping a close eye on issues in the constituency.  I am pleased that following conversations with local residents over a number of years that an informal consultation has started for changes around St Margaret’s Road, Evelyn Street and Winifred Street in Old Town.

The proposal looks to shorten the double yellow lines in the area to allow for additional parking during the evenings and weekends. Letters from the Council will be arriving sometime this week to residents in the local area to explain the plans in more details.

Working alongside Cllr Nick Burns-Howell and Lawrence Elliott, I am keen to hear your views on the proposal and any other changes you would like to see in the area. Please do not hesitate to contact us through robert.buckland.mp@parliament.uk or via our Old Town Conservatives Facebook page.

Residents will be able to formally comment on the proposal using the following reference on the Council website: ST&I/TRO/VO3.

Football is in our national DNA and I am sure that many of us here in Swindon were appalled and concerned by the recent announcement that a handful of clubs are proposing to form their own breakaway European league.

These six clubs announced this decision without any consultation with football authorities, or with the government. But as the Culture Secretary said, worst of all, they announced it without any dialogue whatsoever with their own fans.

The Government is examining every option and has thrown its full weight behind the football authorities and stand ready to do whatever is necessary to represent fans and protect their interests.

Football is nothing without its fans and that is why it is absolutely vital that we support our local lower league clubs such as Swindon Town and Swindon Supermarine, particularly when they are able to safely welcome us back to their stadiums.  I want to pay tribute to the work of Supporters’ Trusts such as the one we have at Swindon Town, and am sure that they will want to feed in their views to the new review of football governance that my friend and keen footballer, Tracey Crouch MP, will be chairing.  Justin Tomlinson MP and I will continue to take a strong interest in the future of local football.