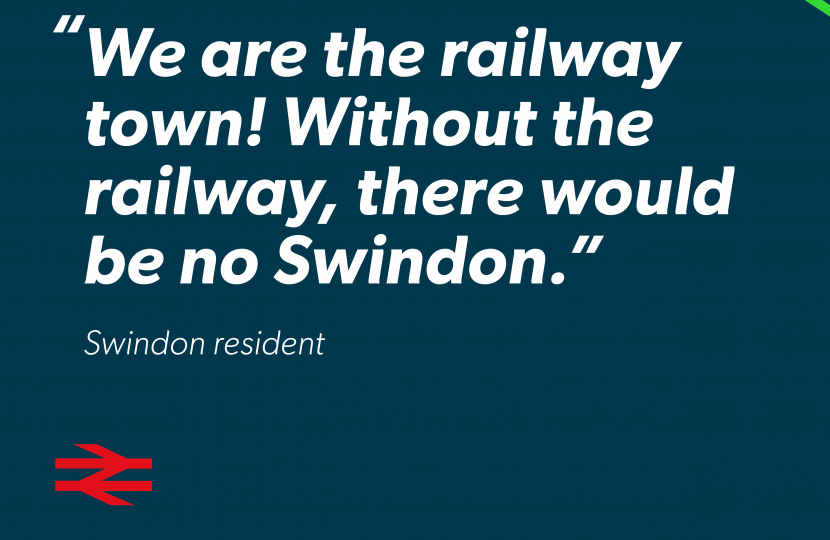 In the 1840s, Swindon, a small market town, was transformed by Great Western Railway, and at its height, the GWR works in Swindon was one of the largest railway engineering complexes in the world.

The people of Swindon have always been immensely proud of the town’s railway heritage, and as one of England’s most important historic railway towns, many of us here in Swindon, and beyond, firmly believe that our town is the ideal location for the home of the new Great British Rail Headquarters.

I have been busy promoting Swindon’s bid to become the home of the new Great British Rail and this week, I was delighted to secure a debate in Westminster. Furthermore, along with North Swindon MP, Justin Tomlinson, I am pleased to have secured the support of Michelle Donelan in Chippenham, James Gray in North Wiltshire, and Danny Kruger MP in Devizes.

This week, we will be sending a strong joint letter of support for Swindon’s bid to Secretary of State for Transport, Grant Shapps MP

I have been running a local campaign here in Swindon to tackle the issue of speeding and anti-social vehicle behaviour. Many residents here in the town have been in touch with me to raise this issue, particularly in the West Swindon area.

I am glad that after raising this issue on behalf of local residents, local Policing teams have been working with partner agencies, as well as landowners, and retail outlets to deter and resolve the issues raised.

A Partial Closure Notice has now been authorised and put in place at the car park of Sainsbury’s supermarket and B&M off Paddington Drive here in Swindon. Police will be enforcing this and anyone breaching the Partial Closure Order could be liable for arrest or a fine.

I will continue to work closely with the police here in Swindon, as well as partner agencies to tackle this issue on behalf of local residents, including exploring different approaches.

Following the closure of the Post Office in the West Swindon Centre, along with Cllr Suresh Gattapur, I have been in close contact with the Post Office and Asda, urging them to work together to restore this vital and much-used facility for local residents.

I have received an update from the Post Office apologising to customers for the temporary closure, following the resignation of the postmaster.

Last Sunday evening, I was honoured to be invited to sing with the Choir and Aldbourne Band, who were all expertly handled by Sheila Harrod, at the Kentwood Choir Unmasked Concert at the Wyvern Theatre. This concert raised much-needed funds for the humanitarian effort in Ukraine.

Finally, I would like to congratulate Swindon Town Football Club on their outstanding season. From beginning the season, with just six players and favourites to be relegated, to ending the season one game away from Wembley. Most importantly, all of the fans have their beloved club back.