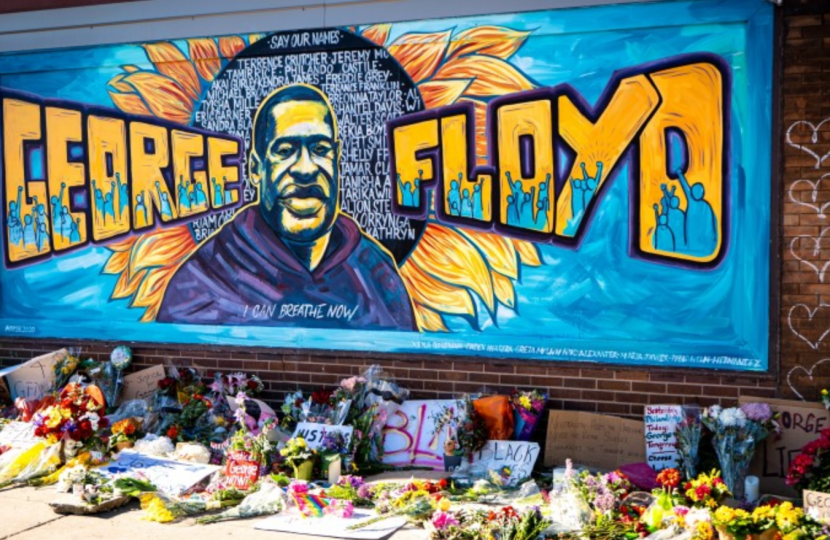 During the past two weeks protesters have taken to the streets across the UK in solidarity with protesters in US, reacting to the death of George Floyd, a 46-year-old black man.

George Floyd died on 25 May after a police officer knelt on his neck for almost nine minutes. The officer is currently awaiting trial for murder; other officers present are also facing charges. The event sparked a wave of protests across the US that spread globally.

While many of the protests have not been organised by any one group, they are associated with the Black Lives Matter movement. In the UK, the Prime Minister said those exercising their right to protest should do so in line with social distancing rules.

This Insight outlines the background to the Black Lives Matter movement and the reaction in the UK to the death of George Floyd.

What is the Black Lives Matter movement?

Black Lives Matter (BLM) is an anti-racist and human rights movement that originated in the US in 2013 from a hashtag – #BlackLivesMatter. The hashtag was circulated following the acquittal of a neighbourhood watch coordinator who shot an unarmed black teenager, Trayvon Martin.

The movement gained momentum in the wake of successive black deaths, often as a result of police shootings in the US.

The phrase “black lives matter” can refer to the protest slogan, the overarching movement or one of a collection of chapters of the Black Lives Matter Global Foundation, an organisation that operates across the US, UK and Canada.

While BLM has been likened to the American civil rights movement, campaigners often shirk the comparison, highlighting the relatively decentralised nature of BLM, without prominent figureheads.

The recent protests show this lack of hierarchy: they are often organised via social media, by multiple campaign groups, without any central spokesperson. While some protests in the US have turned violent, researchers have in the past cautioned against delegitimising the BLM movement by associating it with protest violence outside its control.

The UK reaction to the killing of George Floyd

On the weekend of 30-31 May protests took place in London, Manchester and Cardiff. On 3 June thousands of protesters marched in London from Hyde Park to Victoria Station and then to Westminster, where they gathered outside Parliament.

UK protesters have highlighted their own experiences of racial violence and discrimination. They have drawn attention to events such as the Windrush scandal and the recent death of Belly Mujinga. Mujinga died with Covid-19 after reportedly having been spat at while working at Victoria Station. The subsequent investigation found no evidence of anyone spitting or of the death being linked to the incident. A recent review led by Public Health England found that death rates from Covid-19 were highest among people in Black, Asian and Minority Ethnic groups.

The campaign group Stand Up to Racism callled for people to “take the knee” on their doorsteps and in their communities. The London protests were accompanied by people around the country responding to this call. The gesture traces back to 2016, when American football players knelt during the national anthem to raise awareness of racial injustice. It has now acquired a new significance in light of the circumstances of George Floyd’s death.

How has Parliament responded?

Members of Parliament have also tabled several parliamentary questions to ask the Secretary of State for Foreign and Commonwealth Affairs, what contact his department has had with the US Administration on the civil unrest following the death of George Floyd.

During Prime Minister’s Questions on 3 June the Leader of the Opposition, Sir Keir Starmer MP, said the death of George Floyd: “shone a light on racism and hatred experienced by many in the US and beyond.” He called on the Prime Minister to convey to President Trump “the UK’s abhorrence about his response to the events.”

The Prime Minister said he thought what had happened in the US was “appalling and inexcusable,” although cautioned that the protests “should take place in a lawful and reasonable way.”

Later that day, during the Downing Street press conference, the Prime Minister said: “racist violence has no place in our society,” and that while people in the UK were exercising their right to protest, they should do so “in accordance with the rules on social distancing.”

The police have new public health powers to disperse gatherings taking place in public spaces but cannot use these powers for public order purposes. This means they can only break up protests using their lockdown powers when they are concerned about the risk of coronavirus spreading.

The police also has a duty to facilitate peaceful protests. Officers policing protests must now balance this duty with their new task of enforcing lockdown laws.

Senior police leaders have asked protesters to “work with officers at this challenging time.” Police present at protests that took place over the last weekend chose not to break up the gatherings but did arrest some protesters for lockdown offences.

Coronavirus: Which key workers are most at risk? House of Commons Library

Coronavirus: Which workers are economically impacted? House of Commons Library

About the authors: Doug Pyper is Head of the Home Affairs Research Section and Jennifer Brown is a researcher specialising in policing and crime at the House of Commons Library.

The Prime Minister's statement on the death of His Royal Highness The Prince Philip, Duke of Edinburgh